The Maryland Senate Bill was passed with a bipartisan vote on May 8, 2020. It was supported by Democrats and Republicans on both sides of the Chesapeake Bay. Senator Sarah Elfreth (District 30) sponsored the bill, stating that, “The bill ensures Maryland remains a national leader in preparing ourselves for the impending crisis presented by climate change and sea-level rise.[2]” Annapolis mayor Gavin Buckley and Anne Arundel County Executive Steuart Pittman championed the bill, and Maryland Governor Larry Hogan allowed the bill to go into effect without his signature.

Resilience Authorities were created for areas with significant shoreline that need a flexible, efficient way to fund resilience infrastructure projects. Without these authorities, these projects would be nearly impossible to fund for communities with a strong aversion to new taxes. Resilience Authorities provide structure for local governments seeking to address climate change in their communities through resiliency projects, but puts the power in local leaders’ hands to decide how to pay for the projects. Resilience Authority projects are aimed at addressing the effects of climate change, including sea-level rise, flooding, increased precipitation, erosion, and heatwaves. Funds from these authorities may be used to support many types of resilience operations and infrastructure projects, including developing flood barriers, green spaces, and stormwater infrastructure and elevating buildings[1].

The following paragraphs detail the provisions of the Resilience Authority law.

Currently, Charles County and Anne Arundel Counties have begun the process of establishing Resilience Authorities in Maryland. According to Joanne Throwe, President of Throwe Environmental, “Charles County, MD is ahead of the game and planning to fund some nuisance flooding projects in priority areas within the county as soon as they can, although nothing has been funded yet.  They are still in the early stages of setting up their board.” Additionally, Throwe stated “Anne Arundel County, MD is getting ready to introduce their local bill to authorize an authority in March and we hope to see that pass as easily and as quickly as Charles County’s did.” All local governments within the state are authorized to establish Resilience Authorities; we can expect more established Resilience Authorities in the near future.

So why Resilience Authorities? What is the significance of their passage into law in Maryland? According to Adaptation Clearinghouse, communities in coastal states account for nearly half of the nation’s population and economic activity, and that cumulative damage to property in those areas could reach $3.5 trillion by 2060[1]. Local governments are feeling the effects of climate change more and more each year, and Resilience Authorities give these local jurisdictions the power to create their own, personalized projects to combat these issues in their areas. The Authorities make the process of planning, funding, and completing resiliency projects much quicker, and efficient for local governments, since they are able to bypass the state and federal red tape that usually confines these types of projects. Joanne Throwe stated that, “Resilience Authorities are the next step in providing local governments with the much needed capacity to effectively invest scarce fiscal resources. Authorities are long term tools that can help deal with the long term impacts to our local infrastructure.”

As far of the future of Resilience Authorities, Annapolis, Maryland is planning to use a Resilience Authority to help pay for an estimated $50 million worth of planned renovations to City Dock, the historic heart of Annapolis that hosts some of the city’s biggest events as well as many bars & restaurants. Annapolis Mayor Gavin Buckley is aiming to create waves throughout the country with the city’s use of a Resilience Authority; “As the state capital of Maryland, Annapolis is going to lead the way in this stuff – We’re trying to be the resiliency capital of the country.[2]” Anne Arundel County Executive Steuart Pittman says, “Anne Arundel County is on the frontline of the battle against sea-level rise. In fact, we have 530 miles of that front line in the form of our coast. The finance authority that this bill allows will ultimately save our taxpayers money, protect our communities, and contribute to our efforts to Build Back Better.[3]”

The photos below compare an aerial shot of City Dock as it is now (top), contrasted with a rendering of the improvements (bottom). 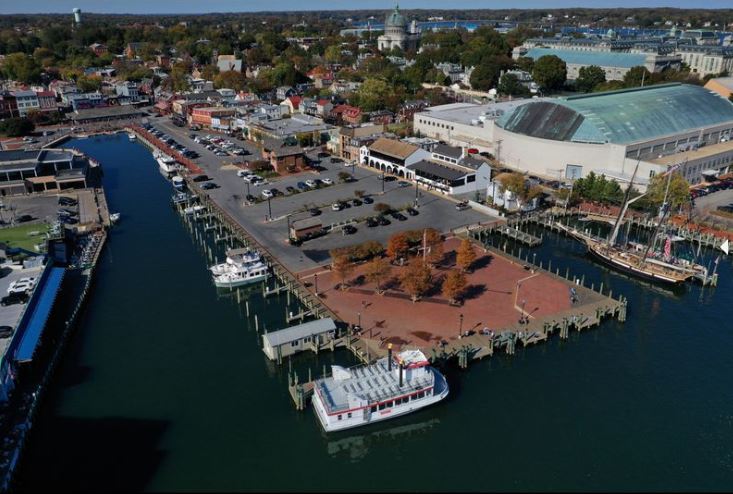 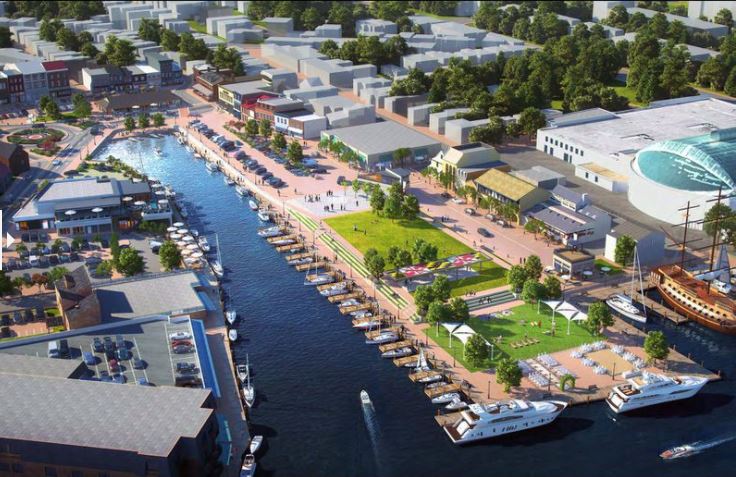